Insights is the official FPPF blog, where we post informative and educational articles about how our products solve fuel problems and improve performance all year 'round. 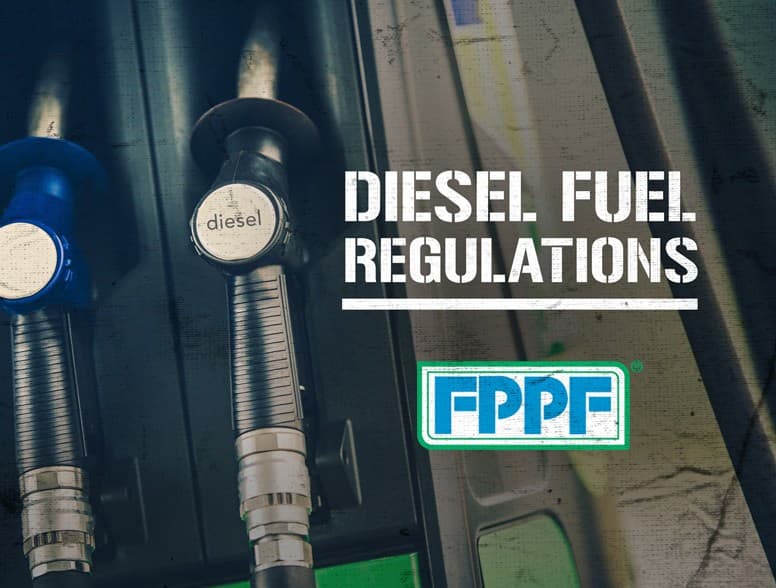 Diesel fuels are heavily regulated. And with constant changes and restrictions to what can and can’t be added to diesel fuels, consistency and performance tend to fall by the wayside. FPPF understands the ins and outs of regulations and develops products with the fact that all diesel fuels are not created equal in mind.

In 2006, the EPA began regulating sulfur more strictly lowering the amount of sulfur in diesel fuel to 15 ppm. Prior to that, some diesel fuel contained as much sulfur as 5,000 ppm. That sweeping change helped reduce overall emissions by over 90% but created a list of engine performance restrictions and issues.

This sulfur reduction was a concerted effort on behalf of the Environmental Protection Agency to reduce harmful emissions of diesel-powered vehicles. The 2006 sulfur restriction coincided with a mandate that forced the availability of ultra low sulfur diesel.

The lack of sulfur in diesel fuel, although cutting down on emissions and the black smoke you used to see billowing from diesel-fueled vehicles, creates a lack or complete loss of lubricity. What does low lubricity mean? More fuel deposits, varnish, wax, sludge and dirty fuel injectors.

How do you combat a loss of lubricity and thus a loss of combustion? You regularly treat your diesel fuel with a premium fuel additive from FPPF. FPPF products such as Diesel Injector Cleaner and Super Fuel Stabilizer are specifically formulated to break up the deposits that inevitably collect on fuel injectors, preventing the optimized, combustible spray of diesel fuel.

All FPPF Products Play By the Rules

All FPPF additives meet the required 15 ppm maximum set by the EPA. The only exception is Killem, which is an EPA-registered fuel biocide that can be used in all hydrocarbon-based fuels including diesel fuel, heating oil, gasoline, bunker fuels and more. The treatment ratios for Killem are very low to make up for its greater than 15 ppm sulfur content. This means that Killem only augments the fuel sulfur content by less than one ppm.

Regulations discussed have only been for diesel-powered road vehicles. Marine diesel has been and continues to be, heavily regulated as well. In fact, within the next year, the International Maritime Organization (IMO) plans to enforce new emissions standards to reduce the pollution created by ships. These ships must also abide by road vehicle regulations by adopting a much lower sulfur-containing diesel fuel. This impending regulation will reduce the sulfur content of diesel fuel from the current 3.5% to 0.5%.

FPPF Marine Diesel Fuel Treatment works hard to eliminate water and inconsistencies from fuel while improving cetane levels and combustion. Since it’s designed to be a year-round treatment (and should be used as such) Marine Diesel Fuel Treatment should be added before fueling at the ratio of 32 fluid ounces per 375 gallons. Help your ship or even smaller watercraft adapt to the ever-changing diesel fuel landscape by using FPPF fuel additives with every fillup.

No matter how diesel fuel is regulated or restricted, you can always count on FPPF to be ahead of the curve. We continue to research and develop new, innovative products that work just as hard as you do.